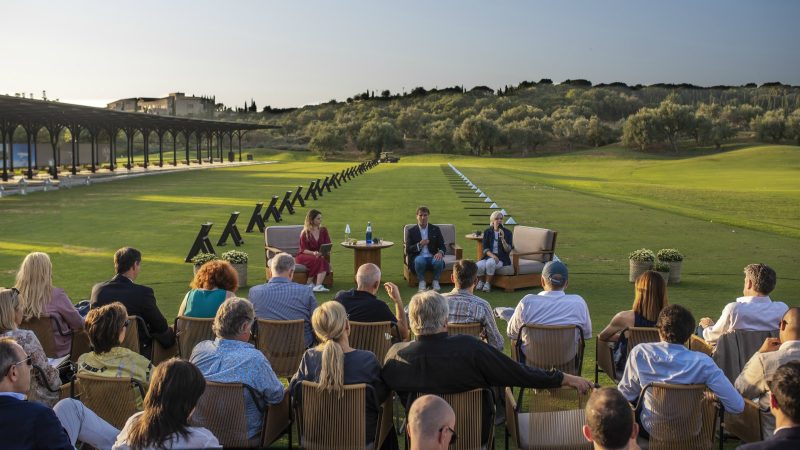 «The great philosophers who were born in Greece 2,500 years ago, have enlightened the western and eastern civilizations alike. They were thinking about eternity, not just about the present. This idea that we should create for eternity, is something we have lost. We need to think not about the next 3 years, but about the next 1,000 years to come”. Those were the words of Brunello Cucinelli, humanist and entrepreneur, at the ‘Democracy & Spirituality Weekend’ in Costa Navarino. In a natural backdrop of lush landscape and centuries-old olive trees, participants from all over the world, were paying close attention to Cucinelli’s words, who conveyed with passion and wisdom, his thoughts on humanistic capitalism, alongside the other prominent speakers who delved into the relationship between spirituality and democracy.

The ‘Democracy & Spirituality Weekend’ returned for its fifth edition 11-13 October, in partnership with the Athens Democracy Forum, including among its attendees, the Minister for Tourism Harris Theoharis, the Deputy Minister for Sports Lefteris Avgenakis, the President, International of The New York Times Company Stephen Dunbar-Johnson, forum delegates as well as several guests wishing to be part of a very topical discussion about democracy.

Brunello Cucinell, Chairman and CEO of Brunello Cucinelli S.p.A., also talked about how the ancient Greek and Roman philosophers have influenced his way of thinking: “The first thing they gave to me, is the idea that I am a temporary guardian of mankind. So if we think and act as guardians, we will act very differently than thinking as owners”.

“The link between democracy and spirituality lies in the fact that all power starts with self-perception”, said Khalil Osiris, International Speaker and C.E.O., Reflecting Freedom, Board Member of the House of Mandela Family Foundation.

During the ‘Socrates-Confucius dialogue’, Angie Hobbs, Professor of the Public Understanding of Philosophy at the University of Sheffield, and Rana Mitter, Director of the University of Oxford China Center and Professor of the history and politics of modern China, brought an imaginary interaction between the two great philosophers, from the 5th century BC to the present, focusing on the different approaches but also on the common ground between eastern and western thinking.

The insightful discussions were moderated by Serge Schmemann, Member of the Editorial Board and Athens Democracy Forum Program Director, and Katrin Bennhold, Berlin Bureau Chief of The New York Times.

Achilles Tsaltas, President of the Athens Democracy Forum, noted in his welcome speech: “Education and justice are the fundamental pillars of democracy and there is a third pillar, reciprocity, which is also linked to the whole concept of spirituality. We should always link spirituality to the ideals and core values of democracy and that is what our speakers have touched upon: the ideas of humanist capitalism, our personal stories and our nobility of spirit feeding democracy and the bridges we need to build between eastern and western thinking and philosophy”.

The insightful discussion of the Democracy & Spirituality Weekend was complemented by a series of curated events: Brunello Cucinelli read excerpts of his book “The dream of Solomeo” and talked with the audience about his personal philosophy, ‘humanistic capitalism’. Prof. Angie Hobbs also read from her book “Plato’s Republic: A Ladybird Expert Book”, talking with the participants about the lifelong dilemma of justice in democracy. The weekend’s participants had the chance to immerse in cultural and Messinian experiences organized by Costa Navarino, including the Philosophy Walks and a discussion on ancient Greek philosophical thinking and spirituality, guided interactive tours in archaeological sites, as well as in olive oil tasting, becoming acquainted with the Messinian culinary traditions.